The daughter of the best-loved children’s book author and illustrator Shirley Hughes, Clara Vulliamy was encouraged to draw and paint from an early age. Clara now illustrates children’s books by other writers, as well as her own. Her picture books tend to be realistic portrayals of the big moments in a young child’s life.

Living with her artist husband and two children in a large house in Twickenham, she is inspired by the things she sees around her. Many of her illustrations depict everyday places close to Clara’s home in Twickenham, such as neighbouring houses and the local school.

Clara grew up in London’s Holland Park, in the house where her parents still live. Her father was an architect and her mother, author-illustrator Shirley Hughes, worked at home, using the kitchen table as her workspace whenever she had a spare moment. Clara does not remember seeing her mother’s stories as they developed. Shirley always managed put motherhood first, and as a little girl Clara did not know how much her mother’s work meant to other people. What it meant to her, however, was the chance to draw and paint to her heart’s content. At the end of each day, she was allowed to use her mother’s leftover watercolours (she never had a “children’s” paint set).

These days, of course, Clara is very aware of Shirley’s achievements, and she is proud to be her mother’s daughter. After graduating from art school, Clara began a career as a portrait painter and illustrator for magazines and newspapers. For the past fifteen years or so, since having children of her own, her work has been devoted to children’s books.

Her illustrated works for other authors include The Big Milly-Molly-Mandy Storybook, a collection of classic stories by Joyce Lankester Brisley. (In fact, Joyce Lankester Brisley also once lived locally, first at Ham Common and, in later life, in a house in Barnes.) Clara’s fresh interpretation of this timeless character in gentle watercolours is sympathetic to the style of the original line art by the author:

In addition to illustrating books for other authors, Clara writes and illustrates her own picture books. These tend to be about real children, with themes that “seem small from the outside but feel huge inside”, such as losing a beloved toy, or starting school. Of her more than twenty published books, Small is probably Clara’s favourite, although she admits that her favourite book is “always the one I’m doing now, or the next one…” She finds it exhilarating to face the blank paper at the beginning of a project and to breathe life into a character for the very first time.

Lately, Clara’s ideas have taken a more magical, fantastic turn. Her recent projects include writing and illustrating Hop into Bedtime (forthcoming from Penguin), as well as illustrating Keep Love in Your Heart, Little One, a picture book written by Giles Andreae (Orchard).

At home in Twickenham

Clara lives in a big Victorian house in a quiet street in Twickenham, with her husband (himself a painter and a teacher), their son and daughter, and three guinea pigs. She has lived there since 1993 and likes that the neighbourhood is a higgledy-piggledy jumble of houses, rather than a series of neat little rows. Having grown up in London, she’s glad that Twickenham has “quite a ‘Londony’ feel” and is close enough to enable the family to go to exhibitions and other events in the city regularly. At the same time, she enjoys seeing local wildlife: the woodpecker that lives in her garden, a heron on Richmond Bridge.

She is less impressed, however, with the abundant squirrel population, after a whole tribe once moved into her loft. By the time they were caught, the squirrels had made a small hole in the roof, eaten a precious box of letters and chewed through wiring. In the end, says Clara, only chocolate buttons succeeded in luring them out!

In the garden with daughter Martha (and Tolly, Hester & Koco) 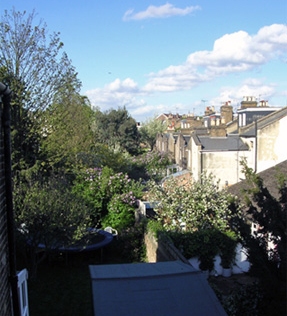 The Thames from the towpath, Twickenham
Clara is inspired by the things she sees around her home every day. She loves the view from her workroom window (especially when the trees are in blossom), looking out over the back gardens towards Richmond. Like many writers and illustrators, Clara spends a lot of important daydreaming time looking out of the window, waiting for ideas. Sometimes, inspiration “just comes, like a little basket on a pulley”.

She also gets inspiration from the “little bits and pieces” she keeps around the house, from a collection of tiny shoes to paper-mâché sculptures and other works of art made by her children over the years. The house is full of artwork: in addition to her own and her husband’s paintings, and their children’s contributions, there are works by both her parents and by friends from art school.

Clara also enjoys the big, open green spaces in the area. She mentions the pleasant and recurring surprise of stumbling upon the water sculpture – of horses and naked women – in York House Gardens.

She also loves living near the river. In particular, her family likes to cycle alongside the Thames from Twickenham to Richmond Bridge. She has memories of lovely times spent with her children “all along the towpath, at every little place”, from the ferry going over to the Surrey side (by Ham House) to all the little houseboats, including “the really eccentric one”, the floating “houseboat” made from rubbish. Another highlight for her is stopping for a cup of coffee at Tide Tables Cafe, under the arches at Richmond Bridge.

Connections between work and home

Clara’s illustrations are often inspired by real places near her home.

One page in Small shows the view of Clara’s street from her front door, while another illustration includes a shop based on the real-life sweet shop (now a private house) opposite St Stephen’s CE Junior School in Winchester Road. In order to get the perspective right from Small’s viewpoint, Clara had to photograph it – by lying on her stomach in the road! 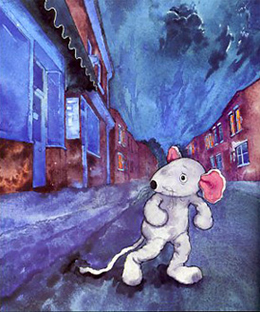 Based on a former sweet shop in Twickenham

House near Clara’s own in Twickenham

One double-page spread in Tom & Small includes a house near Clara’s that she admires. The school in the story is again modelled on one that her children attended (Orleans Infant School, Twickenham). Even Tom’s sweatshirt is based on the actual uniform.

Note: all photographs in this post copyright © Terri McCargar. The character Milly-Molly-Mandy is owned by the Estate of Joyce Lankester Brisley and is reproduced here by permission. All illustrations by Clara Vulliamy remain her copyright and are reproduced here with permission: