Eleanor Updale is the author of the Montmorency series of Victorian adventure stories. Having lived all around South London, Ellie moved with her family to Richmond in 2001.

Formerly a BBC TV and radio producer and editor, Ellie became a published author relatively recently. Her first novel, Montmorency (Scholastic Press, 2003), was an immediate success and won two awards. Since then, Ellie has written and published one Montmorency novel per year. For Montmorency on the Rocks, the second novel in the series, Ellie set some of the most dramatic scenes in Kew Gardens, including a fight scene at the top of the Pagoda.

Ellie grew up in South London and has lived in a number of urban locations, including Clapham, before moving a bit further out to Richmond in 2001. She says she always told herself she liked living close to where things were happening in London, and that she had no idea “there was this semi-rural-feeling place” just a few miles up the road.

Ellie’s home is a tall Victorian house, close to both the centre of Richmond and Kew Gardens, which is one of her favourite places. Living so near the gardens has had a real effect on her. In the winter, when the trees are bare, she can even see the Pagoda from her kitchen window. Ellie has even noticed a greater number of birds in her own garden because they are attracted to Kew.

A haven for authors (and their dogs)

Ellie lives with her husband and three children and their pets. The family is very fond of animals. When they first moved to Richmond they had eight pets (most of them very small). Now there is just one cat and one dog, Tess. Ellie says that Tess would dearly love to be walked in Kew Gardens, but, understandably, no dogs are allowed there. Instead, she usually walks Tess in Richmond Park, often in the early morning. Ellie likes to see the deer and says that in the park it’s possible to feel like you are really in the countryside, although she worries that it is being increasingly “municipalized” with signposts and the like.

Ellie is also a member of the Scattered Authors Society and has met and befriended a number of other writers in the area. They often run into each other in Richmond Park. “Authors,” says Ellie, “tend to be people with dogs.” Another of her favourite dog-walking routes is along the riverside, anywhere between Chiswick Bridge and Ham.

She likes boats too. About once a year she takes a boat trip on the Thames from Hampton Court to Richmond, which is “just about the nicest way to spend the day”.

Ellie is currently learning to sing at Parkshot, formerly a school for girls and now a part of Richmond Adult Community College. Besides admiring the area’s architecture, such as these “beautiful” school buildings, she also appreciates the mix of people and the sense of community. She explains, “What you still have in Richmond is lots of arty people, and people who take life at a different pace. Almost every day you run into someone interesting.”

For many years Ellie worked as a TV and radio producer and editor in current affairs at the BBC. She took some time out to raise her children and also became more involved with other interests, including London’s Great Ormond Street Hospital for Children (which also features in her novel Montmorency on the Rocks).

Now she writes what she describes as “Victorian adventure novels for boys and girls (and adults)”. At the same time, she has returned to university and is pursuing a PhD, studying intellectual history and the letter-writing of scientists in the late seventeenth to early eighteenth centuries. Although it could be a challenge to be immersed in two different historical periods for her studies and her novels, she says there is actually a bit more overlap than one might think. For example, she has been able to draw on her knowledge of older scientific history for her research into Victorian London.

Her first book, Montmorency, began as a series of stories she made up for her own children when they were younger. It tells the tale of a thief who suffers horrific injuries in a fall but is gradually restored to health by a brilliant young doctor. When he is released from prison, he embarks on a double life – casting himself as an aristocrat called “Montmorency”, while financing his new lifestyle through the exploits of his alter ego, Scarper, who sneaks around the smelly underground tunnels of London’s sewers to steal on a grand scale.

Ellie admits that she didn’t know anything about the children’s book market when she began approaching publishers, many of whom rejected Montmorency because it went against the grain. For one thing, the story has no children in it. However, when the book was published (by Scholastic) in 2003, it proved an immediate success, winning two major awards (the Blue Peter Children’s Book Award for “The Book I Couldn’t Put Down” and the Nestlé Smarties Book Prize – Silver), a remarkable achievement for a first-time author. Ellie believes that the very fact that Montmorency was so different from other books around at the time explains much of its appeal.

Since then, she has written and published one Montmorency novel every year. The second, Montmorency on the Rocks, was published in 2004 and was followed by a third, Montmorency and the Assassins, in 2005. Ellie is currently writing a fourth book about her flawed hero, to be published in 2006. Montmorency has also been dramatized and serialized for radio, in abridged form, as well as being recorded as a full-length audio book. The audio book was narrated by Stephen Fry, after he wrote a complimentary review. Ellie was invited to attend the recording, which she enjoyed, although she admits that she almost had to sit on her hands to stop herself getting involved, in her old role as a radio editor and producer.

Ellie is married to a Scotsman (the broadcaster James Naughtie), and Scotland features heavily in her books. For Montmorency on the Rocks, however, she found some inspiration even closer to home. Much of the story’s most dramatic moments take place in Kew Gardens. The famous Pagoda at Kew is one of the iconic images of the book, and is featured on the cover’s spine. The story is set in 1885, and the aristocratic Montmorency is now a secret agent investigating a series of bomb attacks on London’s train stations. His hunt for the bomber(s) leads him to Kew.

In Chapter Thirty-eight, “Return to Kew”, Montmorency and his friend Lord George Fox-Selwyn travel by river ferry from Westminster to Kew. (Of course, most of the bridges that now span the Thames in London had not yet been built, and river ferries were commonplace.) They are looking for the “Bag Man”, the bomber. Ellie deliberately set this scene in the wintertime, even though most people think of Kew Gardens as a summertime place: 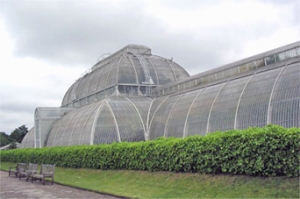 Kew’s Palm House, as approached from the Thames

The boat ride was rather more bracing than Fox-Selwyn had bargained for … As they staggered from the jetty at Kew, Fox-Selwyn announced the first of many changes of plan. They would go straight to the Palm House to warm up. They could see it almost as soon as they entered the gardens, a vast structure of iron and glass, like the hull of a ship upturned on the grass. … (p. 211)

After leaving the Palm House, the pair proceed to a gallery that fails to impress Fox-Selwyn on first sight:

… “Ah! Could it be that modern monstrosity, or do you think that’s the lavatory?” He was pointing at a trim red-brick building, somewhat in the style of a suburban villa, with steps up to double doors. Montmorency took the guidebook and read the entry:

“ ‘Built to house the collection of paintings generously donated by the artist, Marianne North, depicting plants encountered on her travels throughout the world.’ ” 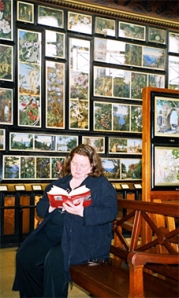 Eleanor Updale reads a passage inspired by the gallery

Inside, they are surprised by what they find:

… They were both expecting a handful of timid watercolours tastefully displayed against flock wallpaper. What they found as they entered took their breath away. Hundreds of pictures in narrow black frames were crammed on the walls, each slap up against its neighbour. Their livid colours shouted across the room. Beneath them the wall was inlaid with samples of wood from across the globe. Above, huge windows all the way round flooded the gallery with light, and a border was decorated with the names of faraway lands: Borneo, Ceylon, Java, New Zealand, America. It seemed that Marianne North had been everywhere, flourishing her paintbrush as she went. … (p. 213)

The story continues, with Montmorency then spying a workman up a ladder cleaning the windows. He recognizes him at once as the bomber and notices that the workman has left his jacket hanging over the arm of a bench. When Montmorency tries to pick its pockets for clues, the man sees him in the reflected glass. Montmorency grabs the jacket and runs out, with the workman hot on his heels. Montmorency searches for an escape:

The Pagoda at Kew

… Before long he saw the mighty form of the Pagoda rising before him. It was one-hundred-and-fifty feet of sheer folly built in the Chinese style by King George III as a surprise for his mother. From its broad octagonal base it rose up, each of its ten storeys a little narrower than the one below, until it drew to a point with a huge golden spike at the top. Montmorency could have run round it. He could have run away from it, into some bushes at the side of the path. He could have ignored the Pagoda completely. Instead he did a very stupid thing. He wrenched open a door at the bottom and ran inside. The Bag Man was there in an instant. Like Montmorency he disregarded the warning signs that forbade the public to risk a climb on the rickety spiral stairs. There was nowhere to go but up, with giddy vistas of the river, the hot houses, the lake, the gallery and then the road spinning before them through the windows as they climbed. At the top, the two men faced each other. … (pp. 214–15)

There follows a dramatic fight at the top of the Pagoda. To find out what happens, check out the book …

The text extracts above are all taken from:

Note: all photographs in this post copyright © Terri McCargar.