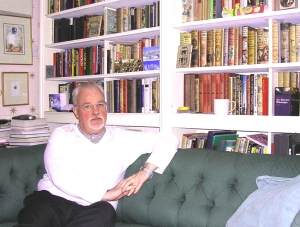 Ian Beck began his career in graphic design, successfully illustrating “for grown-ups” before turning his talents to picture books in 1982. He now has over fifty books for children to his credit (including his own stories as well as books written by others). He is especially known for his teddy bear stories and for illustrating fairy tales. His first novel for older children, The Secret History of Tom Trueheart, Boy Adventurer, will be published in June 2006. Originally from Brighton, Ian spent several years in London before settling with his family in St Margarets in 1988, in a small house “bursting with books and people”. Much of his work has been inspired by local places, such as Old Deer Park in Richmond, the Thames, and Ian’s own house and street.

Ian Beck grew up in Brighton and says the sea is in his veins. After graduating from Brighton College of Art, he worked as a freelance, “illustrating for grown-ups” in the music, magazine, book and advertising industries. His work includes all the Penguin covers for the authors Alice Thomas Ellis and David Lodge, as well as the album cover for Elton John’s Goodbye Yellow Brick Road.

Ian had always been interested in books as beautiful objects and avidly collects the work of the artist Barnett Freedman, as well as children’s books illustrated by Harold Jones. But he never considered illustrating for children until the editor David Fickling suggested it to him in 1982. His first son was a baby at the time, so the idea interested him. The first children’s book Ian illustrated was Round and Round the Garden by Sarah Williams (1983), a book of finger rhymes for babies. The success of that book led to others, until eventually the children’s books took over.

Now, with more than fifty children’s books to his credit, Ian’s work ranges from picture books for the very young to fiction and older picture books, such as Puss in Boots (by Philip Pullman) and The Little Mermaid. Ian also illustrated the programme for the stage production of Philip Pullman’s His Dark Materials trilogy, providing hand-lettering, maps and drawings. (These were also printed in the tenth-anniversary editions of the books.) Recently, Ian has begun writing his own fiction for older children.

teddy from Home Before Dark

The Teddy Robber (1989) was the first book that Ian both wrote and illustrated. In fact, Ian has created a whole series of picture books about teddy bears, including Lost in the Snow, Lost in the Woods, Home Before Dark, Alone on the Beach and Teddy’s Snowy Day. (Ian was even asked to include a teddy on the album cover for Goodbye Yellow Brick Road; apparently Elton John likes them too.) Ian explains that “teddies are a nice thing to draw” because they are inclusive. They don’t represent a particular race or sex, so they “stand in for the child”, whoever the child may be.

Ian has also illustrated many fairy tales. One of his latest is a new picture book edition of The Little Mermaid, adapted from Andersen’s original tale by Ian and accompanied by new illustrations. Ian has also illustrated a picture book called Winston the Bookwolf by Marni McGee (available from Bloomsbury in April 2006). Winston is a wolf who is banned from the local library for eating the books, until a little girl (wearing a familiar red hood) teaches him to devour the words instead. Ian enjoys infusing his artwork with many references to classic fairy tales, playing with the intertextuality between words and pictures.

The Secret History of Tom Trueheart, Boy Adventurer is Ian’s first novel for children and will be published in the summer of 2006 (Oxford University Press). The idea for the book was initially inspired by a menu he designed for the Double Crown Club, a dining club for designers and illustrators. Ian designed the menu as a mock-Victorian chapbook and wrote a spoof story to accompany his illustrations. This later prompted him to rewrite the excerpt as a novel.

The story features twelve-year-old Tom Trueheart, who is called upon to prove that he is just as brave as his six adventurous older brothers (all called by the more heroic name of Jack). Like many of Ian’s works, the tale plays with traditional storytelling conventions.

Ian at his “wet desk”

After leaving Brighton, Ian lived all over London, including Hampstead, the East End, Shepherds Bush, Islington and Stoke Newington. In 1988 he moved with his family to his current home, a small three-bedroom Edwardian house in St Margarets he describes as “bursting with books and people”. He lives there with his wife, Emma, and their three children.

Ian does not have a separate studio; instead he works in one half of the large sitting room, drawing and painting at his “wet desk” and writing at the computer at the “dry desk” on the other side.

Apart from the aircraft noise overhead (from Heathrow), Ian likes almost everything about living in St Margarets. The walk between his house and Richmond along the Thames is a particular favourite, as every season brings something new. He also enjoys Richmond itself and its bookshops, particularly The Open Book and The Lion & Unicorn opposite. He also has fond memories of the area’s parks, Old Deer Park in Richmond, Marble Hill in Twickenham, and especially of playing football with his children there when they were younger.

Connections between work and home

As well as the seascapes from his childhood in Brighton, Ian’s work often reflects the local landscape, particularly the trees and blossom.

Home Before Dark was based on Richmond’s Old Deer Park:

The house depicted in The Teddy Robber, is based on Ian’s house and street.

The house in The Teddy Robber by Ian Beck

Emily & the Golden Acorn, a picture book about a storm, was inspired by a number of personal experiences. The morning after a hurricane struck southern England in 1987, Ian was crossing a square in central London and was profoundly affected by the sight of huge old trees uprooted; to him, they looked naked and strange. A few years later, while living in St Margarets, the Thames flooded the local streets and also seeped into the story. The flooded street includes many details from Ian’s own street, and the house is once again based on Ian’s own home.

He was also inspired by the sight of his children playing in the tree in their back garden. For the book, he changed the tree into a mighty oak. 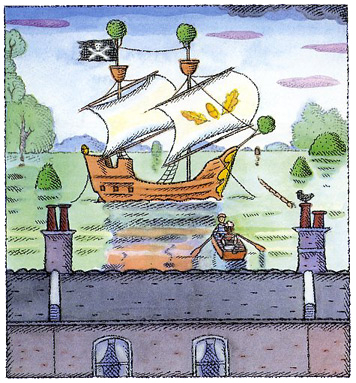 Finally, the acorn imagery was inspired by the acorn decorations on the railings of Richmond Bridge.

Note: all photographs in this post copyright © Terri McCargar. All illustrations by Ian Beck remain his copyright and are reproduced here with permission: